This pop-up show is the only one of its type in the UK and brings together a group of international dealers specialising in tribal and ethnographic art, including African and Aboriginal.

There is a wide variety of textiles, tribal masks and many other objects to see.  Many of these were specially made for ceremonial or ritual use.  Jewellery, arms and armour and headpieces are also featured.  It is an interesting fact that some of the larger pieces are also highly regarded by some collectors for their significant decorative qualities alongside their important historic and cultural values.

This is an important exhibition with talks and lectures also taking place.

Some 140 dealers, from overseas and the UK, take part in this stimulating, popular fair.  It provides a combination of 20th century design, antiques, textiles and works of art, many of which are displayed in a way that gives an idea how they would look in your home.

So whether you want an “industrial” look or a modern twist on the traditional or a more period look this is the place to come for ideas and to achieve your decorating ambitions.

On Wednesday 2nd October the leading interior designer Alidad, will give a short talk on ‘Decorating with Antiques and Antique Textiles’, which will be followed by a book-signing of his new book Alidad: The Timeless Home (Rizzoli). A regular attendee at the Fair he says of it ‘I always enjoy coming to the Decorative Fair at Battersea as its fun, varied, very pretty and well worth a visit. I come to look for the finishing touches”. (See the website for details of this event as pre-booking is required).

Admission: £10.00 inc. catalogue, which gives free re-admission throughout the week

This is a strong celebration of 20th Century British Art – paintings and sculpture – and is a perfect way for them to mark the opening of their new Albemarle Street Gallery. 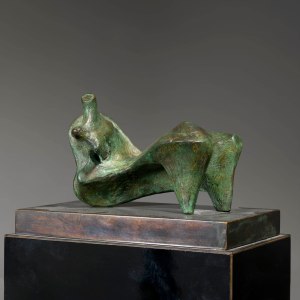 There are some forty works on view garnered in many cases from either the artist’s studio or estate and, of course, some come from private collections. Indeed, some of the works have not been seen publicly for three decades such as the Joe Tilson landscape.

Some of the artist’s names are instantly recognisable while others are only now being recognised properly.  Among them are Wilhelmina Barns-Graham, Lynn Chadwick, Alan Davie, Terry Frost, David Hockney, Alan Lowndes and Ben Nicholson

WALK ON THE WILD SIDE David Spiller at The Portland Gallery, until 18th October 2013

Kentish born artist David Spiller’s art is a mix of Pop Art with a subtle hint of Expressionism.  Taught by Frank Auerbach, his work also shows the influences of artists such as Picasso, Rauschenberg and Jackson Pollock and has a universal appeal to all generations

What brought his art to the forefront in the 1960s was his use of text alongside contemporary cultural images such as Disney characters and song lyrics, such as Moon River and works by the Beatles.  This show concentrates on the works in which he uses text, ranging from his ‘I can’t give you anything but love and murder baby’(1963-1991) to this year’s ‘You must be an angel’. One of his first stencil works is in the exhibition too.

Interestingly enough he still continues to use many of the original fonts he created and when I asked him he said that he does sometimes change the pencil written song lyrics that adorn these striking images.

Week One: Monday 23 to Sunday 29 September

It is hard to believe that this deservedly popular jewellery and silver fair has been running for thirty-one years.  Spread over two weeks (different designer-makers exhibiting each week) it has become a must visit destination to either buy or commission pieces for many people.

It is a festival of individual talent, a move away from the concept of mass-production. Here you can get something special be it a necklace, bangle, ring, cufflinks or earrings for personal wear or striking silver candlesticks, dishes or vases for the home.

The exhibitors are invited to the Fair by the Goldsmiths’ Company and each piece is hallmarked, a sign of its authenticity and quality.  There is something for every budget as prices range from £60 to £16,000. It really is worth a visit!

Sculptures from The Ingram Collection of Modern British Art to exhibit at Canary Wharf, until 15th November

This exhibition of bronzes comes from the collection of Modern British Art put together by media entrepreneur Chris Ingram.  Focusing on the figurative, his paintings, drawings, prints and as we see here, sculpture reflect both the evolving tale of life and also art from the 1900s to the 1960s.  It is also a story of the relationships between artist and the materials, themes and subjects they explored and created. 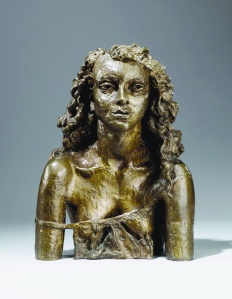 Numbering among the artists whose bronzes are on show are Jacob Epstein, Elisabeth Frink, Eduardo Paolozzi and Lynn Chadwick.

This is a show that marks a departure from the more contemporary works usually shown at Canary Wharf.  As the exhibition curator, Ann Elliott, says “Since 2001 our temporary exhibitions programme at Canary Wharf has focused largely on the work of living – mostly British – artists. It is therefore very timely to look at the work of earlier artists whose progressive, even radical ideas and unique creativity opened up more possibilities for future generations.” 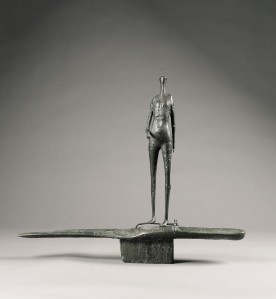 They can be seen in the Lobby of One Canada Square.

Did you ever think that you would see sculptures that were scaled-up from banana skins and chewed gum? No? Well now is your chance.

Talented sculptor Alex Hoda uses his teeth to shape the gum to the form he wants and then freezes the resulting shapes overnight.  He then scans the chosen maquettes in 3D space for their translation into marble.  A similar transformation occurs with the dry banana skins which are transformed into bronze sculptures.

The resulting sculptures manage to be ambiguous but familiar, classical but abstract and somewhat intriguing given the throw-away materials they come from.

Now in its fifth year at this popular central London location the fair once again displays a treasure-load of art and antiques to collectors and first-time buyers. Paintings, furniture, silver and jewellery are just some of the disciplines offered by the hundred dealers showing there.  Purchases can be made with confidence as each piece will have been vetted by an expert committee of fifty specialists. 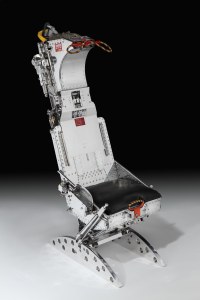 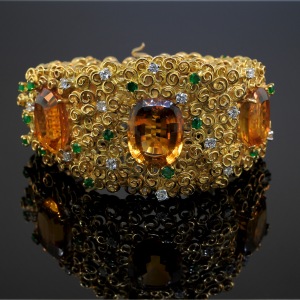 The Fair entrance, restaurant and café have been decorated by the interior designer Guy Goodfellow.  He has drawn inspiration from the Georgian architecture (facades, rusticated stonework and street lighting) in the square and surrounding area. 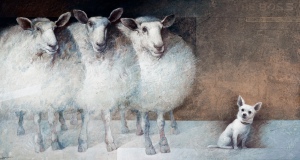 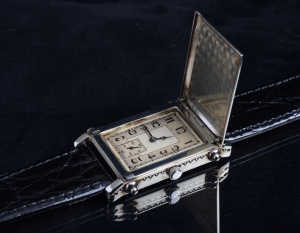 Rare Spitalfields silk engraved tea caddies, the one on the left is by John Touliet in 1790 and on the right is by Emick Romer in 1776 from Mary Cooke Antiques

Following its successful launch and display at Royal Ascot this summer Sebastian Conran’s ICON sculpture can be seen outside the Royal Albert Hall for one day on the 23rd September.  It is there as part of the TEDx Albertopolis event – a half-day of talks on how technology, medicine and science exist alongside the arts in our modern society.

A Sculpture By Sebastian Conran Unveiled At Ascot Racecourse

The sculpture, created from five tons of stainless steel and a Concorde nose, is a great celebration of how technology and art can be combined.  I must admit to missing the plane’s graceful lines – it used to regularly fly over where I once lived – and it is remarkable that this display also marks forty years since Concorde’s first non-stop flight across the Atlantic.

This is an interesting journey of remembering and learning for all who visit.  A wide range of London Subculture is revealed in these little vitrine-like tables that contain the ephemera such, as invitations, found objects, photographs and other miscellaneous items – dance, fashion, design, architecture, restaurants, nightclubs and bars are all represented in this mêlée.  As well as some fifty of these vitrines there are videos, billboard-size images and installations. All in all a walk into time worth taking. 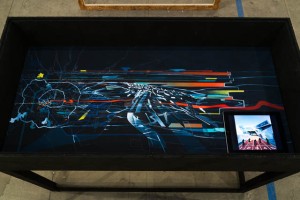 The entrance to The Old Selfridges Hotel is situated next to the Selfridges Food Hall on Orchard Street, W1H 6JS

Oil on canvas, lenticular images, wire on canvas, stainless steel bolts, wood, print on elastic strings and light boxes are the materials used by these Korean artists in this striking show.  Confused?  Don’t be – go along and see just how clever they are – you won’t be disappointed.

Although he has been a painter for nearly three decades this is Dawson’s first solo exhibition of his paintings.  He is, of course, well-known for being Lucian Freud’s studio assistant up until Freud’s death in 2011 and as the photographer who regularly photographed him.  These were the subject of two well-received exhibitions in 2004 (National Portrait Gallery) and 2012 (Pallant House Gallery).

The landscape paintings depict three distinctly various areas –the view from his studio window in North West London, New York’s skyscraper filled skyline from Central Park (very appealing works) and the Welsh landscapes of his childhood.  Like life, a fascinating juxtaposition of time and place.

New Zealand born artist Jan Coutts moved to the Britain early in the 1990s and studied sculpture, drawing and print.  It was also the time she first visited the Serengeti.  It was the beginning of a love affair with African wild animals that remain the focus of her inspiration.  In her studio she brings to her canvases elements of the three areas of her artistic study which results in these powerful, graceful, elusive images that engage with the viewer.

All images courtesy of the Galleries