Stanley Spencer: Heaven in a Hell of War

I am sure that many of you know the work of Stanley Spencer and his great role in figurative art in 20th century Britain.  The works in this exhibition are part of the decorative scheme that Spencer painted for the Sandham Memorial Chapel that was built by John Louis and Mary Behrend to contain what they considered his ‘castle in the sky’ and in recognition of his great artistic skills.  The paintings were created over six years and the interior decorative scheme of the chapel was inspired by the Scrovegni Chapel in Padua which had been painted by Giotto.  The chapel was later dedicated to the memory of Harry Sandham, Mary Behrend’s brother, who died of an illness first contracted when he was fighting in Salonika during the First World War.

The paintings are not of fighting but are, as Spencer himself said of them, ‘a symphony of rashers of bacon’, a ‘tea-making obligato’, a depiction of life that signified a ‘heaven in a hell of war.’   They are superbly powerful and the menial tasks of daily life mixed with personal and unexpected details are a perfect metaphor for the idea of reconciliation.  He depicts the figures in a Mannerist way and uses a sensitive palate throughout.  Note too the still-life elements of the works.  They reflect, from memory, Spencer’s own experiences as a hospital orderly in Bristol and later when he was posted as a soldier to the front in Salonika. 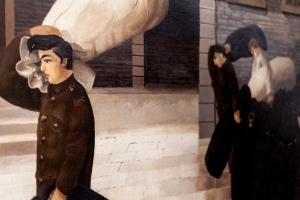 As we approach the hundredth anniversary of the Great War these paintings serve not only as symbol of that horrific conflict but also reflect that in our own time troops in Afghanistan perform similar daily rituals.  The chores of war vary little over a century.  Hope for peace and reconciliation however lives on

The exhibition comes, courtesy of the National Trust, while work is being carried out on the chapel itself.  It will go on to Pallant House Gallery in Chichester from mid-February until June 2014.

I will leave the last word to Spencer himself because in my opinion they achieve all that he states and have the power to move the viewer profoundly.  He wrote to his patron, Mary Behrend, on October 3rd 1932 “I would not dream of asking you to concede to such a request … & in one way it is against my best feelings … but I think the arched & predella pictures arranged (without frames) round a gallery would be impressive ….they would blow the ‘Gallery’ atmosphere to the four corners of the heavens.” Tate archive (TGA 882.4)