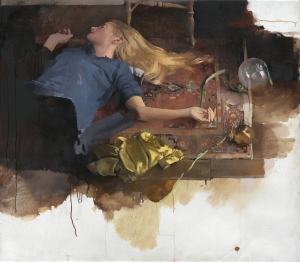 This new exhibition has all the hallmarks of Kelley’ distinctive narrative style with his concentration on light, an effect he achieves in his portraits by using the technique that was favoured by the great 18th century English artist Joseph Wright of Derby.  It is done by building a small enclosed space in a corner of his studio, with a window on one side and the remaining sides curtained off.  The window is also curtained and by adjusting it he is able to control light on his subject in the way he requires.

Diarmuid Kelley
Study For a Portrait, 2012
oil on canvas

His models are drawn from his pool of friends and the actress Olivia Williams is particular muse featuring in many of his works.  He is also a very talented still-life artist as well. 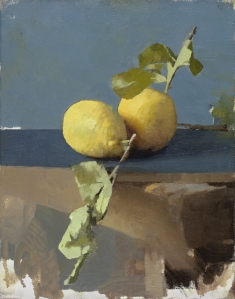 His paintings are found in many private collections including that at Chatsworth and a portrait of Her Majesty’s Chief Inspector of Prisons, Dame Anne Owers hangs in the National Portrait Gallery.

Diarmuid Kelley
I Come and Stand at Every Door, 2013
oil on linen