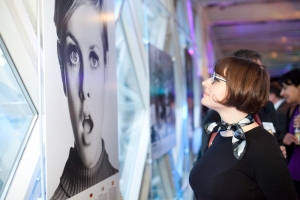 Visitors to Tower Bridge will, on the West Walkway of this iconic structure, be able to get a flavour of what was an equally iconic so-called “swinging” decade – ‘The Sixties’. Using 26 large-scale panels to display more than sixty images that will bring this special time back to life to those who lived through it and those who wished they had. Mods & Rockers, film stars, Prime Ministers, racing drivers, pop stars and many more, including Mary Quant and Twiggy are there to be seen. 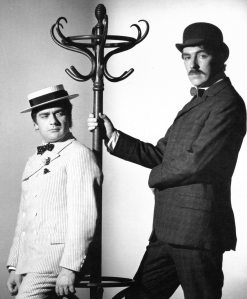 This photograph of Peter Cook and Dudley Moore is a rare one. It was taken by the film producer and director Bryan Forbes as a publicity shot for his 1966 film The Wrong Box. Appropriately enough the exhibition was opened by his wife the actress Nanette Newman who is seen here with David Wight, Visitor Development and Services Director for the City of London Corporation.