There is still time to see this rather special exhibition that celebrates two of Spain’s most well-known artists who first met in Paris when they and their respective wives (both named Pilar) were staying in the same hotel .  It is a story of friendship and family because the artists, their wives and children would holiday each year in Saint-Paul de Vence and there the two artists would work together and grow in mutual respect.  Chillida regarded Miro as a revolutionary in his art and in his championship of causes he believed in and indeed in the 1970s Chillida received Miro’s support over his controversial sculpture Lugar de Encuentros III.

“Miró was a fantastic person, his work inspires an unusual feeling. Everyone has
always noticed him because of colour, but I look at the drawings of Miró. The
drawings are very important; all the curved lines were always convex, never
concave. This was an important problem: I drew concave lines and his were
convex. He changed my way of looking at the line and space.” (Eduardo
Chillida, quoted in Sculpture Magazine, November 1997, vol. 16, no. 9)

The family association and collaboration continues to this day because Chillida’s children and Miró’s grandson have loaned unpublished letters and poems and personal photographs.  Thus this show gives a heart-warming glimpse into the lives of both artists. 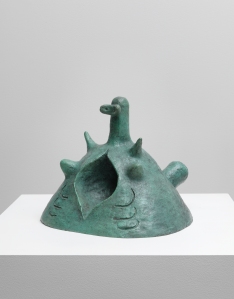