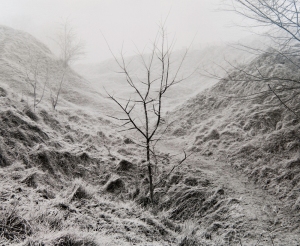 As we mark today the hundredth anniversary of Great Britain’s entry into the First World War I thought that I would draw your attention to this very beautiful and moving exhibition at the Fleming Collection of the work of the Scottish photographer Peter Cattrell.

The inspiration for this body of work started when Cattrell came across a photograph of his great-uncle William Wyatt Bagshawe and three other men of the Sheffield ‘Pals’ Battalion. They had enlisted in response to Lord Kitchener’s call to arms and all four died as a result of the first assault along the Somme on July 1st 1916. In 1989 Cattrell discovered his great-uncle’s name on the War Memorial at Thiepval in Belgium. 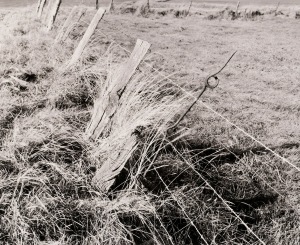 Seven years later, armed with his camera, he returned to the Somme and it was to be the first of many visits in which he captured the landscapes which had been the sites of such horrific scenes in the Great War. In fact during his visits he came across shrapnel and debris which he brought back to his studio and very carefully photographed with the same respect as his landscapes. I cannot really find the right words to say how much these images moved me. They took me by surprise. In their sense of peace they provoked in me a profound sense of loss for all who lost their lives there and also just as nature has revived so too a hope that we too will grow in a greater sense of camaraderie and unity so that such folly will not be repeated again.

Alongside them is a group of photographs by George P Lewis, on loan from the Scottish National Portrait Gallery, showing women working in heavy industry and transport during the War.   The Women’s Work Committee for the Imperial War Museum commissioned them from Lewis in 1918 and these silver gelatin prints were produced by Cattrell in 2004 at the SNPG’s request. 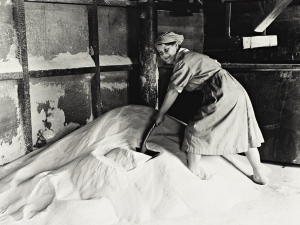