Situated not far from the British Museum is the fascinating Cartoon Museum which shows British cartoons and comic art from the 18th century to the present.

The current exhibition is devoted to the First World War and shows how British cartoonists were from the beginning involved in the propaganda war to bolster morale and lampoon the enemy. 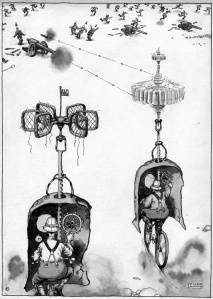 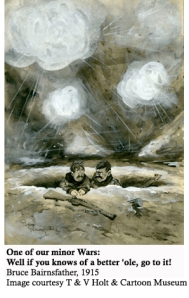 Probably the most well-liked cartoon of the war is Bruce Bairnsfather’s ‘Well, if you knows of a better ’ole, go to it’. While he was criticised in Parliament for his work, Bairnsfather was highly popular with the troops. The three hundred or so images come from newspapers, magazines, comic postcards and children’s comics. There are also some French and German postcards and cartoons from trench publications which were actually produced by those serving. Some new commissions specially created for the show can be viewed too.

The exhibition provides a wide- ranging insight to all facets of the war, including air raids, conscription, conscientious objectors and women’s war work. Some may find a few politically incorrect by today’s standards but many will bring a smile which is, of course, what they were meant to do. 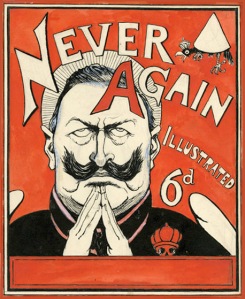