Mary Kelly – On the Passage of a Few People through a Rather Brief Period of Time &  Zarina Bhimji
Smudged (Jangbar), Pippy Houldsworth Gallery, 6 Heddon Street, London W1, until 4th October

Mary Kelly,
On the Passage of a Few People through a Rather Brief Period of Time, 2014. Installation view.
Image copyright Mary Kelly, courtesy Pippy Houldsworth Gallery.

In what is her first solo London exhibition for more than ten years Kelly examines the legacy of the past The death of the cultural theorist Stuart Hall (1932-2014) earlier this year was described by some as the ”end of an era” and it was this that inspired the artist to seek what makes an “era” both personally and politically. She does this by the installation Circa 1968 (2004) with recent lint works. 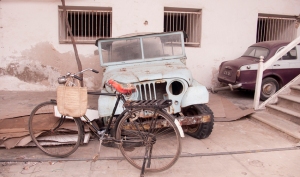 While in The Box there is an engrossing display of photographs by former Turner Prize nominee Zarina Bhimji which subtly question our interpretation of historical documentation.