In 1939 Lobo moved to Paris at the end of the Spanish Civil War where he soon found his niche within the group of international artists, known as the School of Paris, which included Jacques Lipchitz, Pablo Picasso and Henri Laurens. 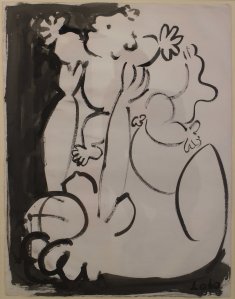 As the exhibition title suggests Lobo was fascinated by the female form and was adept at depicting it sensually in his exquisite bronzes with an element of abstraction. He also explored the theme of motherhood through his drawings and paintings. As this drawing shows he really could catch the joy and bond between child and mother.

all images are copyright