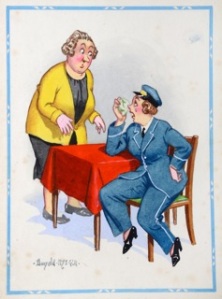 It is somewhat strange in our age to think that in 1954 cartoonist Donald McGill and his publisher were prosecuted under the Obscene Publications Act for those delightful, saucy seaside postcards adorned with revealing costumes, bulging bodies and of course the double-entendres and innuendo that accompanied the images. Many of the postcards in 1954 were destroyed but as so often in history you cannot destroy a good thing and the images have lived on, still popular in the national psyche. 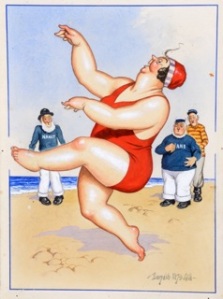 This fun show features over a hundred works from the McGill Museum and Archive which has sadly had to close, a tale told in the accompanying catalogue. The gallery is also launching Bernard Crossley’s Donald McGill: Postcard Artist, the first comprehensive biography on this extraordinary artist 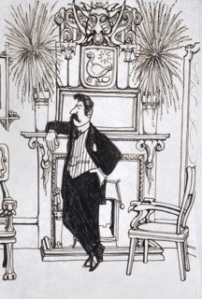 I must also briefly mention the original artwork of Peter MacKarell used in an anthology of poems about antiques. Called ‘GOING FOR A SONG’, it has been compiled and introduced by Bevis Hillier.