The inspiration for this exhibition, curated by Kate Neave, is J.G. Ballard’s 1966 novel The Crystal World in which a jungle and its living beings become crystallised as they are overwhelmed by an advancing entity.

There are elements of the idea of degeneration running through the works in this show which are probably apposite for our present day world but this is only one intriguing element in these pieces where the idea of overabundance is presented by each artist. 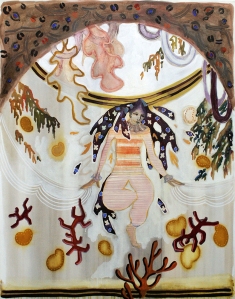 In Lucy Whitford’s works there is a sense of longing and loss, beauty and the grotesque, while Freya Douglas-Morris’ paintings are imbued with evocative ideas of the familiar and unfamiliar. The layered, recurring motifs used by Nicholas Johnson create a feeling of darkness that lures the viewer in, while his use of deteriorating digital prints reminds one of our technological world.