A New Sculpture in London’s Trafalgar Square, until December 2015 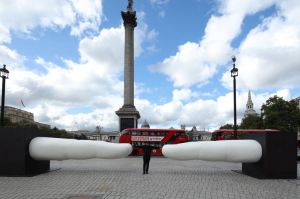 Visitors to Trafalgar Square will no doubt have noticed the new sculpture on King Charles Island (near the top of Whitehall).  Entitled You it is the work of the Mexican sculptor José Rivelino and weighs 25 tons and is 14.5 meters in length. The two pointing fingers represent human equality and when one passes between them it represents the idea of inclusivity.

This is the first of a series of Mexican contemporary sculptures to be revealed in the capital over September and is part of the Dual Year of UK and Mexico 2015.