This new show features the work of the ground-breaking artist Judy Chicago.  She has arguably set the agenda for women artists both as an activist and through her writing and art. She helped bring the perspective of women’s’ art to the foreground and her influence continues to this day.  Some of her Car Hood sculptures are part of Tate Modern’s current “The World Goes Pop” exhibition.

This main theme of Kudo’s work is a sense of disillusionment with the modern world. It is clearly reflected in these works which were created in the first ten years (1963-72) he spent in Paris.  The major piece, shown alongside works from his dome and cube series, is ‘Garden of the Metamorphosis in the Space Capsule’ (1968). 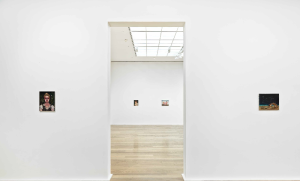 This exhibition, which has been three years in the making, contains paintings where elements of portrait, landscape and still life are brought together.  Smith writes of her work: ‘Difficulties in identifying and separating out phenomena aren’t artificially simplified but embraced in all their complexities. Thresholds are hard to determine; clouds in the sky are indistinguishable from the scum washed up with the surf’.