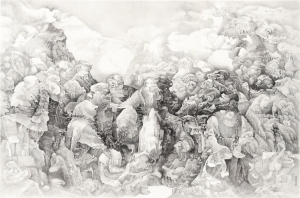 This very special exhibition opens in Frieze Week and closes at the end of Asian Art in London Week.  The artist Liu Dan (b.1953) is a contemporary master in the highly regarded Chinese art form – the traditional school of ink painting. These ten works, which have taken him four years to create, represent a new departure for him and are inspired by his great interest in Renaissance European drawings.

The exhibition will feature Raphael’s drawing Saint Benedict Receiving Maurus and Placidus as it was the inspiration for the artist’s large-scale work Redefining Pleats of Matter (縐褶被重新確定).  There are also six works depicting scholar’s rocks, the stones that were highly prized by Chinese scholars, officials and connoisseurs for more than a thousand years.

On the question of difference between him and the Old Masters Liu Dan has observed: ‘I don’t think there is any difference except that they are dead and I am still alive. On the other hand, because I’m still alive, they are alive too. I don’t advocate the literati ideology, but I endorse the literati spirit. I don’t belong to a particular tradition either. I just want to keep up the artistic tradition where freedom is unrestrained.’ 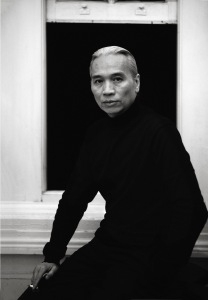