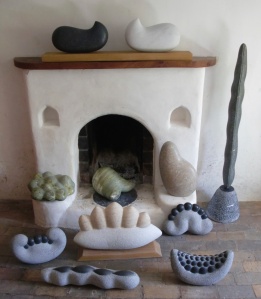 This is Anthony Turner’s second one-man show and one can easily understand why.  His sculptures in differing stone and marbles are of vegetables and exotic fruits and reflect both the artist’s and the gallery’s belief in a connection with the natural world. Indeed, the artist eloquently sums it up saying ‘I see matters of huge importance to the whole human condition in the curves on the side of a bean’.

‘’The Burghers of Calais’ by Auguste Rodin, bronze, cast by Alexis Rudier.
Courtesy of Sladmore Gallery

This exhibition marks the gallery’s fiftieth anniversary and has taken ten years to put together.  The gallery’s director Edward Horswell has assembled two reduced-scale complete sets of Rodin’s well-known Burghers of Calais.  These 18 inch reductions were first worked on by Rodin in 1895, while the monumental sculpture was being installed in Calais.

Horswell says of them and other Rodin pieces in the show that it allows the visitor to make ‘rich comparisons between different foundries, dates of production, and individual patinas.’ Works that are for sale are accompanied by a certificate from the Comité Rodin in Paris.

It is a show that lovers of sculpture should really try and see.