One can certainly understand why Timothy Wilson, Keeper of Western Art at the Ashmolean Museum, asked Vicki Ambery-Smith, to create these six stunning representations of iconic Oxford buildings which were chosen by her and with which she is familiar since she grew up in Oxford. 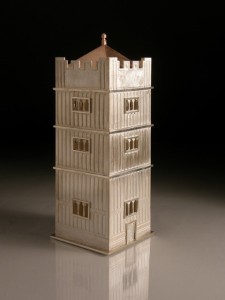 The “major” item in the exhibition is the sterling silver and gold-plated model of the three hundred and fifty year old Sheldonian Theatre. When the roof of the “box” is opened a perfectly photo-etched view of the theatre’s interior is revealed.  A perfect way to commemorate a 350th anniversary. 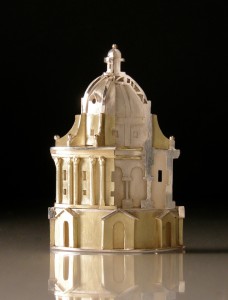 The other buildings are either depicted as jewellery or boxes and even a condiment set.  They include The Radcliffe Camera, Magdalen College Tower, Keble College, St John’s College and the Bodleian Library box.  All reveal the architectural detail for which the artist has become so well-known and eagerly sought after.  Five of the above buildings can also be seen in the large-scale ‘Oxford Ring’. 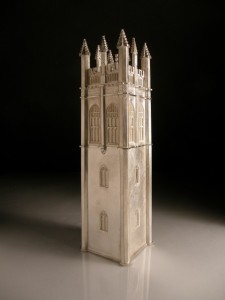 Four of Hugh Colvin’s Oxford-inspired architectural installations are shown alongside these wonderful pieces.