Even if one knew nothing at all about this colourful, celebrated 17th century figure the exhibition’s title gives a clear clue about the stirring, changing times in which he lived.  The exhibition starts with the execution of Charles I, an event which Pepys, playing truant from school, witnessed.  We learn how Pepys in 1658 underwent the removal of a large bladder stone without anaesthetic or antiseptic – and yes the surgical practices of the era were somewhat scary and yet fortunately he survived the trauma.  In 1660 he was on the ship bringing Charles II and his brother James, Duke of York back to England at the Restoration of the Monarchy.

Dirk Stoop, c.1661,
Charles II’s cavalcade through City of London on 22nd April 1661, the day before his coronation. Oil on panel.
(c) Museum of London

It is his diary for which he is most widely known and which he wrote in shorthand.  He started writing it in January 1660 and continued writing it until 1669.  We learn through it not only details of his personal life, including affairs and friends but also of major events such as the Plague and the Great Fire of London.

He was something of a Renaissance man and was an adept administrator in naval matters, an MP and a member of the Royal Society and all these aspects of his life and times are revealed through the two hundred objects in the exhibition drawn from private and public collections.

Suit worn by James, Duke of York, at his wedding to Mary of Modena, 1673,
(c) Victoria and Albert Museum, London

On the death of Charles II in 1685, Pepys continued to serve his brother James, the new King, who had been his main patron.  However James lost his crown in the Glorious Revolution of 1688 and William and Mary succeeded to the throne and it as at this juncture that Pepys withdrew from public life and continued to pursue his many interests, including music, in retirement until his death in Clapham in 1703. 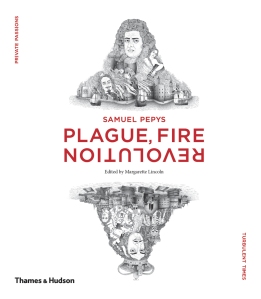 This volume which is published alongside the hugely enjoyable exhibition is, if anything, even more of a treat.  It is beautifully illustrated and includes a larger number of pictures, objects and engravings to provide a really engaging view of the world of Samuel Pepys (1633–1703).