The emphasis of this delightful exhibition is on the figure in Impressionist paintings and the twenty-eight works on show come from UK collections. The colours in the 1876 painting Young Woman Seated by Renoir provided the inspiration for the four themed areas of the show – ‘Painting of the Future’, ‘Private Worlds, Public Gaze’, ‘Modern Life’ and ‘Impressionism in Britain’ – but the lay-out is cleverly designed so that the visitor can see glimpses of each area wherever they are in the exhibition space and thus looking forward or glancing back they may experience the full impact of this very special show.

Many of the artists included were part of the first Impressionist exhibition in Paris in 1874 but exponents of Impressionism in the United Kingdom are also recognised with the inclusion of artists such as Sisley, Steer and especially Sir George Clausen through a group of eight of his works on paper, including pastels, from the Holburne’s own collection. 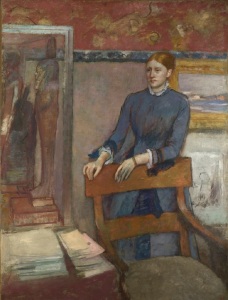