Delacroix and the Rise of Modern Art, Sainsbury Wing, National Gallery, London, until 22nd May 2016

This is a very interesting exhibition because while sadly it may not be so much of a crowd drawer as other exhibitions, it tells about an important chapter in 19th century French painting – the story of Eugène Delacroix (1798-1863) who despite being trained in the Neo-Classical school broke away from that tradition and became as Baudelaire put it ‘a poet in painting’.

Delacroix was an admirer of Rubens and of English painting.  His works with their bold brushstrokes and use of colour were criticised by the establishment as were his choice of subjects but he was supported by his fellow artists such as Courbet. Delacroix wrote in his diary “I dislike reasonable painting.”

While a third of the paintings on show are by Delacroix, the majority are by other artists –Impressionists, Post Impressionists, Symbolists, and Fauves – who were influenced by the genius of his work and also, like him, dared to break the rules and be innovative. As Cézanne aptly summed it up – “We all paint in Delacroix’s language”. 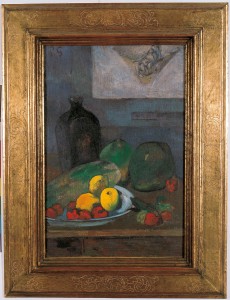 Certainly, to my mind, Delacroix rules over this well worth visiting show.