Among the Audrey Hepburn related lots is this really rather special one which I thought may be of interest: 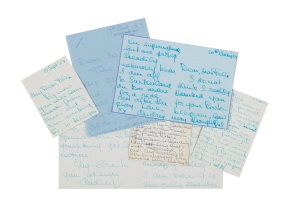 1951-1960,
providing a rare insight into a young Audrey Hepburn’s life both public and private, comprising: a handwritten autographed postcard dated 1951, from Monte Carlo sent while filming Monte Carlo Baby, she writes Would you believe it I’m in Monte Carlo working on the French and English version of a French Picture…this place is heavenly the best thing that’s happened to me.; a handwritten letter on The Whitehall, Chicago, headed stationary announcing her broken engagement to James Hanson from the start It is with a heavy heart I am writing to tell you James Hanson and I are no longer engaged, I know there is little I need explain to you, a gentleman of this profession. For a year I thought it possible to make our combined lives and careers work out…It is all very unhappy making but I am sure it is the only sensible dicision [sic]. with dated envelope November 14, 1952; a lighthearted note dated 9th August 1953 This is to say good bye and god bless you, until the happy day I see you again…; a letter from 20th May 1954 referencing her first play with Mel Ferrer, Ondine, Mel and I are still working on supernatural but are getting steadily naturally tirder[sic]…, a note inviting Aylmer to Hepburn and Ferrer’s ‘secret’ wedding, dated 14th September 1954, she writes …how dearly we would love you to be with us on our wedding day, 25 Sept., and how very much it matters to me. Please come we will have the car take you up to our mountain peak, Friday, for a gathering in our chalet of our nearest and dearest!…Saturday will be the wedding…We want to keep it a dark secret in order to have it without the ‘press’. Lots of love also from Mummy, Audrey, with a corresponding handwritten letter from Mel Ferrer and a follow up postcard handwritten by Hepburn We were so so sorry you could not come to our wedding, we wanted you there very badly…; two autographed typed letters relating to the premier of War and Peace signed by Hepburn and Ferrer dated 11th October and 12th November an extract states We long to hear from you soonest, as we can then confirm the seats for you. We also expect you to help us celebrate after the showing. Much love Audrey and Mel, the final correspondence is a short typescript autographed letter dated 17th August, 1960, a proud Audrey writes Dearest Felix,…Sean is truly a dream and I find it hard to believe he is really ours to keep. I long to show him to you. We all three send all our love signed in her distinctive turquoise blue ink and kisses Audrey; additionally there is a handwritten letter from James Hanson written prior to his broken engagement to Audrey; and two hand written letters from Audrey’s mother Ella van Heemstra, written during the run of Ondine and showing some disdain for Mel Ferrer That frog faced delinquent with the spindly legs has caused sufficient havoc to last a long time and I believe that Audrey is getting rather sick of the neurotic side to him!