This exhibition features thirty-eight wall-hung images and a freestanding work.  Using the AA Road Atlas of Europe the artist has transformed the maps into what may almost be thought to be charts of the stars but in fact using white and grey dots she denotes villages, towns and cities. In doing it in this manner she raises the question of migration and settlement in both a historical and contemporary way.

Image by Galina and Olga Chichagova.
Courtesy of Sasha Lurye

This is a wonderful voyage of discovery into the world of Russian children’s books in the post-revolutionary period of the 20s and 30s with these works from the Sasha Lurye Collection. Much of the artwork has not been seen before and includes rare early 20th century Jewish books and hand-printed books made by the Segodnya Collective.  It is fascinating to learn that these books which told about contemporary life or traditional folk tales were influential on book design in Europe, including the UK. 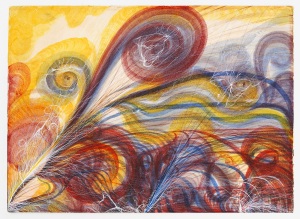 Georgiana Houghton (1814-1884) was a spiritualist and medium whose drawings were part of her communications with the spirit world.  Her colourful, abstract watercolours are now considered to be a precursor of abstract art.  She believed that when executing the drawings she was being guided by spirits, including Titian, Correggio and St Luke and she duly noted on the reverse of the works whose help she had received. An intriguing show indeed.