It is appropriate that Liss Llewellyn Fine Art should hold this exhibition at the Morley Gallery for the College had some very beautiful British murals which were destroyed in the Blitz during the Second World War.

In 1939 the Ministry of Information set up the War Artists Advisory Committee (WAAC) under the chairmanship of Kenneth Clark who was the National Gallery’s Director and the WAAC were asked to ‘draw up a list of artists qualified to record the war at home and abroad’. In the end some four hundred and three artists were commissioned to record all aspects of the War.

An eight volume series of pocket-sized pamphlets – War Pictures by British Artists – was published in two sets of four in 1942 (War at Sea, RAF, Army, and Blitz ) and 1943 (Soldiers, Production, Air Raids and Women) to great success despite the poor quality of the printing.  This exhibition includes many of these WAAC artworks as well as those produced by other artists and illustrators who were working privately.

The combination of these works provides us with an exhibition that embraces all aspects of the War and brings the period to life before our eyes.  It reminds us of the debt we owe those people in the forces and at home who did their bit unflinchingly. The exhibition is accompanied by an excellent catalogue. 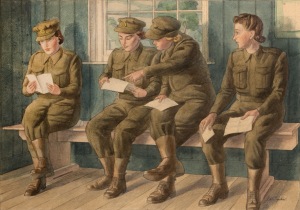