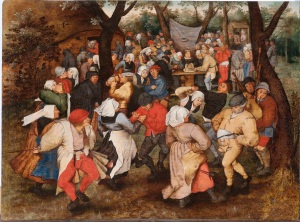 This is a very special show for it reveals the Holburne’s Wedding Dance in the Open Air, following conservation and technical examination, to be by Pieter Brueghel the Younger and not as previously thought a work by a follower. Congratulations are due to their then Director Jennifer Scott (who is now Director of Dulwich Picture Gallery) who discovered it in the Museum’s store room and who co-curated this exhibition with Dr Amy Orrock.

Visitors when they enter the exhibition can see a Bruegel family tree and the exhibition reveals the work of the family across four generations through thirty-five pictures drawn from the National Gallery, the Royal Collection Trust, the National Trust, the Fitzwilliam Museum, the Ashmolean Museum and the Barber Institute of Fine Arts.  The Holburne Museum with its three works by Pieter Brueghel the Younger holds the largest collection of his paintings in the UK.

The exhibition starts with the Adoration of the Kings by Pieter Bruegel the Elder (note he did not spell his name with an h) which hangs alongside a similarly entitled work by his father-in-law Pieter Coecke van Aelst. It makes an interesting comparison. Bruegel’s sons Pieter and Jan and their descendants such as Jan van Kessel the Elder or David Teniers the Younger who married into the family are eloquently represented.

It is interesting to see how Pieter and Jan produced copies of their father’s compositions and variations of them.  Jan could arguably be said to be the first to have depicted floral studies in a style which continues to this day. This is an exhibition that celebrates Flemish painting and this prolific family whose works have not lost their appeal over the centuries. 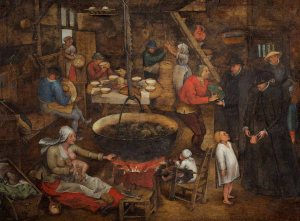