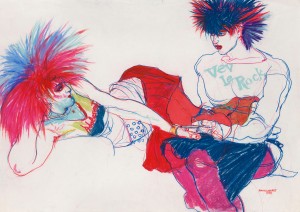 Jo (Josephine) Blanche Brocklehurst (1935 – 2006) was both an artist and a lecturer at Central Saint Martins fashion school and this exhibition proves exactly how talented she was. Brocklehurst depicted the subculture scene of the 70s through to the 90s drawing live whether in fetish clubs, punk squats – one was near her Hampstead studio – and the performance scene, in Berlin and New York as well as London. Some of her iconic punk images are in the V&A’s collection and her works inspired designers such as Thierry Mugler and Jean Paul Gaultier. 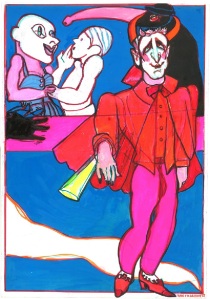 Many of the works are being shown for the first time and don’t miss the documentary film which features the show’s co-curator Isabelle Bricknall and the artist Howard Tangye. It is a show that should be seen in the flesh – so to speak – because it perfectly recaptures the spirit and place of its time.