I was fortunate enough to meet the author Andrew Ginger at the two exhibitions he curated around the theme of ‘Cecil Beaton At Home’ at Salisbury Museum and Sibyl Colefax & John Fowler in 2014. They were excellent shows and it was remarkable to see objects and paintings from Beaton’s homes.

View of the dining room, Ashcombe 1935. The curtains were of an orange-and-yellow striped silk
© The Cecil Beaton Studio Archive at Sotheby’s

Now thanks to Andrew’s continued enthusiasm and dedication to the fascinating subject of Cecil Beaton in his own homes we have this hugely enjoyable and well-researched book which is copiously illustrated bringing the houses, Beaton, his friends and loves to life.

The name Cecil Beaton is well-known to many for he was multi-talented – a celebrated photographer, costume and set designer, playwright and designer of fabrics – but he was also as this book amply proves a good interior decorator creating beautiful, striking rooms, whether in his homes or the New York hotel suites he decorated and was allowed to stay in at a discounted rate.

The and Winter Garden at Reddish House, painted left-handed by Cecil after his stroke, 1979
photograph by James McMillan, (copyright for CB artwork to National Portrait Gallery, London)

The book rightly focuses on Beaton’s two Wiltshire homes – Ashcombe House and Reddish House – with their remarkable and sometimes eccentric interiors which I would so loved to have seen but thanks to this book I at least can enjoy them, especially that beautiful Edwardian-influenced drawing room at Reddish.

There have been many marvellous books on Cecil Beaton but to me this book is the best as I believe people’s homes reveal them and Beaton certainly comes to life through the pages of this book. Wonderful! 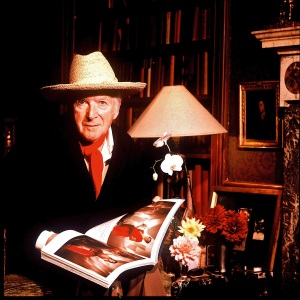 The last portrait of Cecil, looking through his last fashion spread for Vogue in the library at Reddish House, September 4, 1979
copyright Lee Higham, Assistant, 1979

This really is a fascinating and revelatory exhibition as it takes us into Beaton’s private world and looks at his two homes in Wiltshire and his life there. In both homes there is a sense of theatricality whether the beautifully evoked Circus Room (Ashcombe) recreated here, or in the more formal elements of the Reddish Drawing Room that have been reunited once more.

Cecil Beaton in his first costume of the night for the Fete Champetre, in his Circus bedroom, 10 July 1937, Ashcombe © Getty Images/ Time Life

It is fortunate that curator Andrew Ginger is Director of Beaudesert Ltd and The Cecil Beaton Fabric Collection since it has meant that the special chintz for the Reddish Drawing Room once more covers the sofa, which Garbo sat on when she visited Beaton. Beaudesert Ltd was also responsible for the recreation of the “Circus Bed”.

Beaton’s certain eye for detail and composition both in his homes and his various costume designs and film and theatre sets has meant that he is still a source of inspiration and study for young designers.

However it is just not the physical settings that are considered there are his relationships with his mother Esther, secretary Eileen Hose as well as his love life -, his friendship with Greta Garbo and with the younger American academic Kin Hoitsma. Scrapbooks recall the numerous visitors who enjoyed his hospitality over the years. His skill as a painter is not ignored either with portraits of local children which he gave to their families. There are interior sketches of Reddish which he did with his left hand following his stroke.

This is a really all-encompassing look at Beaton’s country life in all its facets and it has certainly made me rethink my perception of him in a much warmer way. Do listen to the recollections of his local neighbours on the telephone. I also think it is wonderful that the Drawing Room curtains he gave to the villagers and which are used in the Village hall survive so well to this day, surely a tribute to him?

Generously supported by The Cecil Beaton Studio Archive at Sotheby’s, The Aldama Foundation, Quilter Cheviot, Savills, Sotheby’s, The Salisbury Area Board, The South West Area Board and other generous benefactors.