Far the best way to introduce this exhibition is to quote the artist himself “I’m inspired by natural beauty and harmony, I love to paint.” 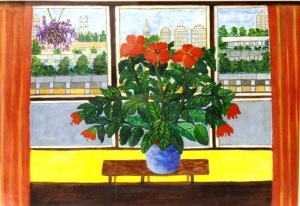 A View From My Window
Rudi Patterson

A statement that is more than amply proved in this vibrant exhibition, mainly of landscapes in differing media – oils, watercolours and gouache. But we are just seeing one side of his artistic output since he also painted abstracts and linear compositions, mixed media pieces and created ceramics.

Although self-taught it is obvious that Rudi Patterson (1933 – 2013) was a multi-talented man. Born in Duckenfield, a Jamaican sugar plantation village, he came to the UK in the late 1950s where he became a model for Mr Fish and British Airways and also an actor. Among his many television acting credits are appearances in Z Cars, The Professionals, playing opposite Cliff Richard in Two A Penny and in the Rolling Stones documentary film Sympathy For The Devil. He was also an accomplished stage actor. I am quite sure that some of you will remember him.

He was one of this country’s leading black artists and had his first London show in 1970, the first of many in London and elsewhere. Freddie Mercury, Andy Williams, Twiggy and Stevie Wonder are among the celebrities who acquired his works. Where was Rudi’s studio you may wonder? Well, many of the paintings were created in each of the three council flats in which he lived in the Royal Borough of Kensington and Chelsea – Finborough Road, Hesketh Place and a block Ernő Goldfinger designed next to his Trellick Tower.

This retrospective is a very fitting tribute and includes many pictures that have not been publicly displayed before.