It is a hundred and fifty years since the death of John Gibson RA (1790-1866) who was a leading neoclassical sculptor of his time. He was born in the Welsh town of Conwy but when still a child moved with his family to Liverpool. He was enthralled by Ancient Greek and Roman Art from an early age and his artistic talent and enthusiasm was recognised by a group of supporters who raised the wherewithal for him to go on a study trip to Italy in 1817. 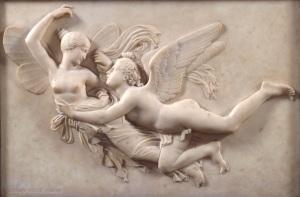 In Rome he was able to study under the leading sculptor of the day, Antonio Canova and was urged by him to set up a studio in Rome.  Gibson did so and thanks to a European clientele decided to settle there saying: ‘In England my life would be spent in making busts and statues of great men in coats and neckties; here I am employed upon poetical subjects which demand the exercise of the imagination, and the knowledge of the beautiful.’.  His sculptures were also popular in this country where he was known as ‘Gibson of Rome’ and by 1844 (the year of his first return visit) he counted the Queen and Prince Albert among his patrons. In 1836 he was elected as a Royal Academician. 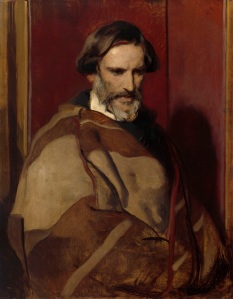 He had bequeathed his artworks to the Royal Academy on his death in 1866 and works on show in this exhibition and others on display at Bodelwyddan Castle, Denbighshire, Wales are part of this significant bequest. 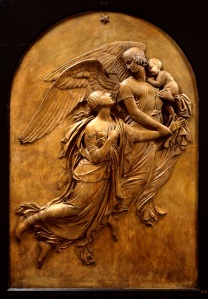 This exhibition is complemented by a virtual exhibition ‘The Gibson Trail’ which has images and information on over one hundred and fifty objects in the collections of the Royal Academy, the Victoria & Albert Museum, Tate Britain, the Palace of Westminster, Westminster Abbey, the National Portrait Gallery and Buckingham Palace. The website www.gibson-trail.uk includes an interactive map showing the locations of Gibson’s works in the capital.