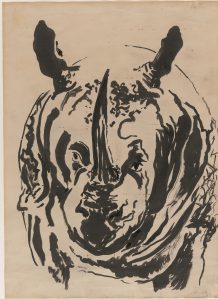 The British Museum’s Room 90 plays host to two very good exhibitions of drawings.  The first Touch features forty works by that great British contemporary artist Maggi Hambling who although proficient in all media – painting, drawing, printmaking, sculpture – regards drawing as the heart of her working practice.

The show’s title ‘Touch’ reflects Hambling’s belief that there is a deep connection between artist and subject.  She explains: : ‘I believe the subject chooses the artist, not vice versa, and that subject must then be in charge during the act of drawing in order for the truth to be found. Eye and hand attempt to discover and produce those precise marks which will recreate what the heart feels. The challenge is to touch the subject, with all the desire of a lover.’ 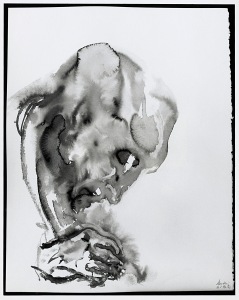 The show also marks the gift of fifteen works by the artist to the British Museum and follows on from the idea, originated by Francis Towne in 1816, of artists giving some of their works to the Museum.

Portrait of Jean-Baptiste de Champaigne and his wife Geneviève , Nicolas de Plattemontage, 1677,
260.00 x208.00 mm, Black chalk with red and white chalk on paper
© The Trustees of the British Museum

Nearby is French portrait drawings from Clouet to Courbet a wonderful selection that highlights the Museum’s notable holdings of French portrait drawings. There is something intimate about a drawing – as Maggi Hambling suggests – and so no wonder artists used it to depict family and friends.  It is also a good medium to try out new ideas of portraiture. As well as these ravishing drawings there are examples in other media including enamels, medals and an onyx cameo.

Leopold Mozart and his two children, Wolfgang Amadeus and Marie Anne, 1777,
320 x 200 mm. Watercolour and bodycolour, on contemporary gold, black and green wash mount
© The Trustees of the British Museum