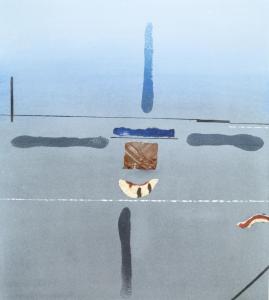 Although scenes in Australia and America are the subject of these somewhat abstract pastels the artist describes the way he depicts them as ‘a sort of visionary geometry’. I certainly feel that he also reflects his native Yorkshire in some of the wonderful colours he uses and it is quite understandable why he has such an international reputation.

This is the first time that these prints made by the celebrated Russian sculptor Naum Gabo (1890 – 1977) have been seen publicly. He was persuaded at the age of sixty to make prints and the first – Opus 1 – is on a small circular piece of tissue. He used the same woodblock to make another print which he gave to his daughter Nina for her ninth birthday in May 1950.

He went on to produce a serious body of woodcuts (Opus I – XXII) until his death. His daughter and her husband have particularly treasured those received as gifts and even given them special names.  This is a unique opportunity join them in their admiration of Gabo’s work.

This show of works by Boyd & Evans of large-scale photographs continues their exploration of the wild landscapes of America’s south-west. It is almost a visual diary, one they have been working on since the 70’s.  These new works show signs of human occupation but with no human figures raising the question are they now abandoned or unused places?