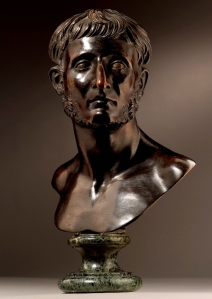 This is the first time that the notable gallery Tomasso Brothers Fine Art have exhibited at the celebrated La Biennale des Antiquaires in Paris. Among the pieces they are showing is this bronze portrait bust of the famed ancient Greek physician Modios Asiatikos by François Girardon, who worked for Louis XIV.  It is recorded as being in the sculptor’s own collection and is illustrated in the series of engravings entitled La Galerie de Girardon (c. 1709) and more recently is included in the new monograph on Girardon.  If such clear provenance was not enough on its own then prospective purchasers may be interested to know that it also bears an inventory mark for the Tuilleries Palace.