This firm’s specialises, under the leadership of Sandra Hindman, in manuscripts, miniatures, rings and jewellery from the Middle Ages and the Renaissance. They have garnered a colourful and rich selection of important acquisitions as these images show and one can totally understand why they number major institutions among their clients.

Histoire Ancienne jusqu’à César and Fait des Romains
In French, illuminated manuscript on parchment
With 78 miniatures by the Master of the Coronation of
Charles VI and a collaborator
France, Paris, c. 1370-80 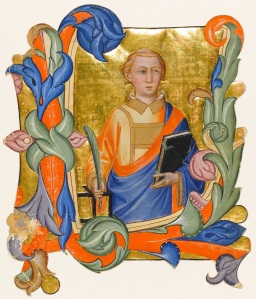 In this the Museum’s bicentenary year visitors have a wonderful opportunity to learn and understand more about the world of Illuminated Manuscripts. The exhibition combines the art of the original creators of these works with up-to-the minute research into the technique and ingredients used. Some one hundred and fifty manuscripts and fragments, with many of the exhibits being drawn from the Museum’s own collection, are displayed and date from the tenth to the sixteenth centuries. Those from the Viscount Fitzwilliam Founder’s bequest cannot be loaned out to other museums. 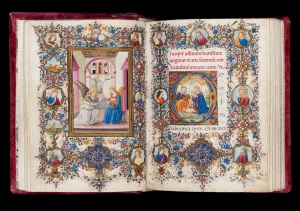 Over the last four years research has covered many interesting facts such as the use of smalt (ground blue glass) on a Venetian illumination book indicates that the artist had contact with the nearby glass-makers on the island of Murano and interestingly enough it pre-dates the use of smalt by Venetian artists by fifty years. It has been discovered that egg yolk, more usually associated with artists working on panel who used it as a binder, was also sometimes used in the production of these ravishing manuscripts.

The exhibition takes us to the artistic centres where they were created in Europe and also dispels the belief that most manuscripts were produced by monks since from the eleventh century scribes and professional artists were involved in the production of manuscripts.  It also looks at later alterations to manuscripts and how some have been faked in later times. 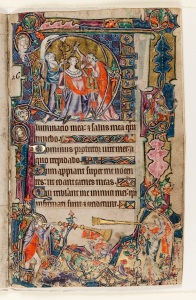 It is a revealing and fascinating exhibition that draws (no pun intended) the viewer in and allows them to understand the magnificent, rich and colourful world of Illuminated Manuscripts.

Miniature, Pentecost showing the Virgin surrounded by the twelve apostles. Hainaut, Valenciennes, circa 1480-1490. Marmion, Simon (follower or assistant of).
© The Fitzwilliam Museum, Cambridge.