While to many of us the coast or countryside of Sussex appear idyllic places to live in the first half of the 20th century avant-garde artists and writers were drawn to live there.  Their communities were experimental whether artistically or domestically.

At Charleston Vanessa Bell and Duncan Grant not only painted but created interiors whose appeal lasts to the present day while at Ditchling Eric Gill and David Jones followed the arts and crafts tradition and at West Dean Edward James with Salvador Dali followed the Surrealist road (see my blog A Surreal Legacy, 07/12/2016). 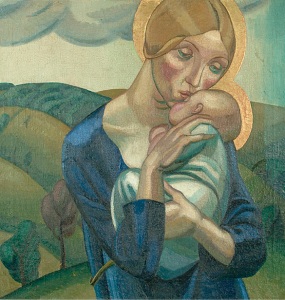 Add to this mix artists such as Edward Burra, Serge Chermayeff, Eric Ravilious, Henry Moore, John Piper, Lee Miller, Eileen Agar and Paul Nash and you will see how they individually reacted to their surroundings – some embracing and others more unsettled by them.

The exhibition’s curator Dr Hope Wolfe summed it up saying: “The metropolis has long been assumed to be a catalyst for Modernism: a melting pot in which people from different places could meet, exchange ideas, and explore new ways of thinking and making. This exhibition asks what experimental artists, writers and makers of other kinds were doing in Sussex in the early twentieth century. For some, a rural retreat provided an opportunity for escape and alternative living. Enclaves were made of homes and communities, although works created in them are often suggestive of anxieties that accompanied attempts to break with convention. Others critiqued their new contexts, troubling the idea of Sussex as an idyll and sparking controversy with work created for local audiences. Comparing the lives and works of makers associated with different modernist movements, the exhibition illustrates how the regional setting both amplified their contrary energies and facilitated their attempts to live and represent the world differently. In turn, it shows how seemingly picturesque scenes were reimagined and transformed by the unsettled artist.”