These are the first major London exhibitions dedicated to Immendorff for twenty years.  He studied under Beuys at the Kunstakademie Düsseldorf and his early works reflect the ideas of challenging fine art traditions and political institutions as well as reflecting the anti-war sentiment of the era.

In the gallery’s large downstairs space are pictures dating from Immendorff’s later working life. A period when he was suffering from amyotrophic lateral sclerosis (ASL) but was still able to work with the help of assistants. They are inspired by Hogarth’s The Rake’s Progress and were part of a massive body of work which followed on from the artist being asked to create designs for Stravinsky’s The Rake’s Progress being performed at the Salzburg Festival in 1994. 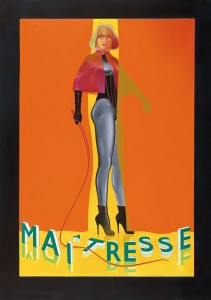 Jones kept the original painting and then between 2008 and 2015 he worked on a series of canvases where he explored the themes of space and colour around the original poster’s motif.  They and the original are shown here together along with works on paper which reveal his thought processes.