This is a wonderful celebration of this multi-faceted artist and draftsman, Hubert Robert (1733-1808), who could also turn his hand to being an interior decorator and garden architect, including designs for the Queen’s Dairy at Rambouillet for Marie Antoinette.  We are fortunate that while the book has been published to coincide with the exhibition in Washington DC’s National Gallery of Art which ends at the beginning of October it will have a very long and useful life as a stand-alone reference work thanks to the scholarship and up-to-date research that the authors and contributors bring to it.

His time in Rome, where he met and became friends with Fragonard, Panini and Piranesi, led to his penchant for depicting ruins often peopled with figures and for which he became known as ‘Robert des ruines’. He received the support of wealthy patrons and in 1784 was appointed ‘Keeper of the Museum’ (the future Louvre Museum).  He was imprisoned for a while after the French Revolution but on his release continued with a series of paintings depicting the Louvre’s Grande Galerie.

I have long been interested in 18th century French art and have enjoyed seeing works by artist such as Boucher, Greuze, Fragonard, Vigée- Le Brun and so on, but my favourite has always been Robert.  To me he captures the spirit of the time perfectly and while his works are out of my reach I now have the great pleasure of this book to enjoy. 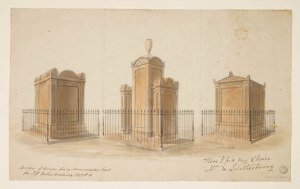 This two-part exhibition looks at the theme of mortality in both Soane’s personal and professional lives.

Death and Memory looks at the death of his wife Eliza in November 1815 and the profound effect that it had on Soane for the remaining twenty-two years of his life.  There is the design for his family tomb in the churchyard at St Pancras Old Church – and yes you would be correct in assuming this was an inspiration for the red telephone boxes still in use.  There are also ‘sealed receptacles’ on show which are somewhat like time capsules.  They were sealed up before Soane’s death with the instructions that there were to be opened on the 50th, 70th and 80th anniversaries of Eliza’s death.  I shall leave you to discover for yourselves what they contained.  Also there is the text – Crude hints towards a history of my house in Lincoln’s Inn Fields (1812) in which he imagines his house as a ruin to which visitors come and try and work out its original purpose.

The second part the Architecture of Legacy considers Soane’s professional role as an architect, including some of his own designs and those by architects such as William Chambers, John Flaxman, Piranesi and George Dance.  The drawing by Soane for a proposed monument for the Duke of Wellington was executed just a month before the architect’s own death. 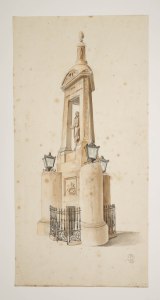 Soane Office,
Design for a monument to the Duke of Wellington