I believe that we owe a great debt of gratitude to Bouke de Vries for his belief, which reflects that held in China and Japan, that broken important ceramic pieces are worthy of repair. He has said “I wanted to give these objects, which are regarded as valueless, a new story and move their history forwards. A broken object can still be as beautiful as a perfect object.” It is a great philosophy and thanks to his artistic imagination and great skill – he is a ceramics conservator – he has created some wonderful pieces.

This show of works reflect the enduring role of China in the production of ceramics worldwide over the centuries. His works are thought-provoking, sometimes humorous, but always engrossing. He has specially created a new non-ceramic work for the exhibition – a plaster doll of a Chinese dancer which combines the old with the new through his use of computer circuit boards.

PS: You can also see: 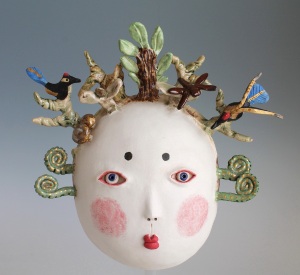 As someone who likes ceramics I find it both encouraging and exciting that contemporary ceramics are becoming more eagerly collected and appreciated.  Now in its thirteenth year this year’s fair has ninety participants offering a wide variety of pieces.

The natural world – whether rural or urban in nature – provides the inspiration for many of the artists.  Be warned though as I am sure many of you will be tempted to purchase a work whether a practical item such as a delightful teacup or something intensely sculptural. With prices from £25 upwards there are choices to suit all pockets. 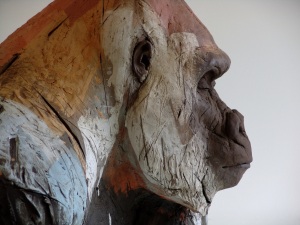 Published by GILES in association with the Mint Museum

We are fortunate that the accompanying exhibition at the Mint Museum, Charlotte, North Carolina brings us this very fine and informative tome because it celebrates some two hundred objects from the more than two thousand British ceramic pieces in the Museum.  It really is a fine collection encompassing the majority of the 18th century British factories who produced ceramics in salt-glazed stoneware, lead-glazed earthenware, creamware, soft-paste and hard paste porcelains.

The selected pieces are notable for their craftsmanship, quality and, in some cases, their distinguished provenance. Every piece is illustrated in colour and fully catalogued, giving us a fascinating insight into the production and decorating techniques that created these examples as well as their history.

New Hall
Cup and Saucer, circa 1785-1790
Decorated by Fidelle Duvivier

So whether you are a collector, scholar or lover of social history I can certainly say this a book that you will find both enjoyable and useful – just like many of the objects it focuses on! 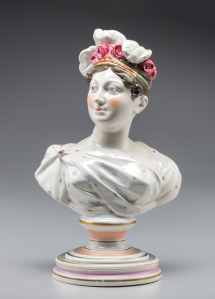 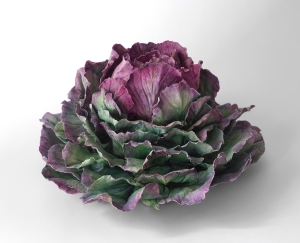 London is very fortunate to be able to enjoy this first solo exhibition of work by Clare Potter.  She is a New York-based ceramicist whose love of flowers and things botanical led her, untrained, to start creating these marvellous pieces in colour-washed biscuit porcelain.  Be warned and get in there quickly for her New York shows are usually a sell-out.

A Pair of Vauxhall Vases decorated by James Giles
c. 1764-68

One can understand why collectors eagerly await this annual selling exhibition of English, Continental and Oriental porcelain for there is always much to tempt them. This year delivers some great pieces of which I show a few.

The opening words of the catalogue’s foreword offer a useful reminder as to why some of us collect: Collecting ceramics gives us intriguing windows into the past with each piece resonating with the life, times, hopes and aspirations of its original owner. 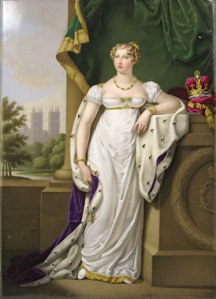 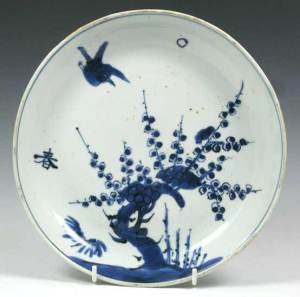 A Chinese Ko-sometsuke Dish for the Japanese Market
Tianqui, c. 1621-7 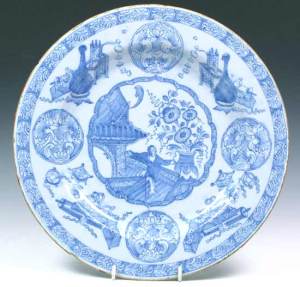 A Liverpool Delftware Charger after a Chinese Kangxi design
c. 1760

A Derby Figure of Andromache Weeping over the Ashes of Hector
c. 1780-85

These thirty very special ceramics which make up this selling exhibition come from an important private collection.

Considered a golden age, China under the Song dynasty was prosperous and a place of change and invention whether social, economic or “scientific”. For the latter think printed bank notes, the use of gunpowder and, as this exhibition so ably proves, ceramic design and techniques.

Song ceramics have had a lasting impact on the world of ceramics and been held in high esteem ever since they were first produced. By the 15th century they were being copied in China and their influence can be traced in Art and Studio pottery movements of the West until this day. 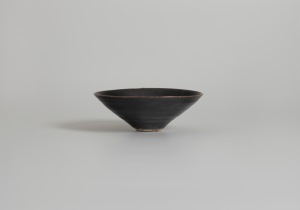 Works from both the Northern Song (960-1127 AD) and Southern Song (1127-1279 AD) periods are included. As one might expect these serene objects have been garnered from the collections of some of the great Western Twentieth century collections, including Mr & Mrs Alfred Clark, Alfred Schoenlicht, Johannes Hellner and Lord Cunliffe.

Reflections on a Derby porcelain exhibition at Kedleston Hall

The idea of having an exhibition of Derby porcelain at Kedleston Hall, just outside Derby, is an appealing one. The original aim was to combine Derby porcelain from Kedleston with fine examples of the factory held by other National Trust properties. Sadly, things have appeared not to go to plan as at least ten National Trust houses with relevant pieces failed to respond adequately or at all.

It was therefore fortunate that this show had the support of Royal Crown Derby, who have generously loaned the Kedleston Vase (c 1790) back to the house it was made for, and the Derby Porcelain International Society, for two members of the latter have loaned pieces from their own collections to make up for the shortfall of National Trust items. 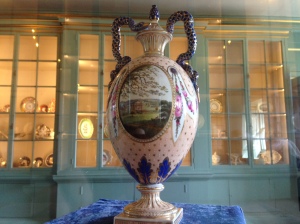 There is no doubt that what is there on show is of some interest and appeal but it is sad to think that more of the Trust’s own Derby treasures were not forthcoming and I think that serious questions need to be asked within the organisation as to why.

The press release I received said “Kedleston plates up Derby porcelain exhibition”, and some wag may now possibly be tempted to ask “has the National Trust gone to pot?” I must add that having been a keen National Trust visitor over the years and having the pleasure of writing about them that I feel somewhat disappointed and let down.