This new show of work by this talented figurative sculptor tells, through eighteen bronzes and accompanying drawings, the story of a modern love affair – and yes it does end on a happy note so perfect for Valentine’s Day. 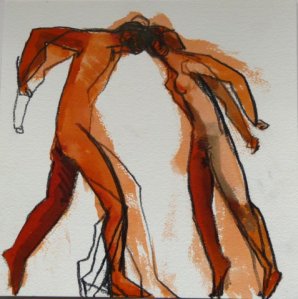 Dickens says of her use of bright colours: ‘there is a perception that bronzes need to look antique, but in Greece and Rome they were painted, and the colour has simply fallen off with age.  I want my sculptures to look new and bright.’ She certainly achieves that here.

These two exhibitions complement each other well.  In Randolph Schwabe – artist, teacher, diarist we see how his keen observation of people and places was transposed onto paper or canvas to produce an accurate, detailed observation of the subject matter.  He was a gifted art teacher and it is no surprise that in 1930 he became Professor and Principal of the Slade School of Art a position he held until his death in 1948.

The second Drawn to the 19th Century celebrates the continuing appeal of works on paper to collectors.  It was a time that saw the watercolour come into its own as a medium especially when depicting nature “en plein air”.

This is the first time for over fifty years that this artist’s work is being shown in London and it provides a view of his artistic output from his early woks to more recent examples. 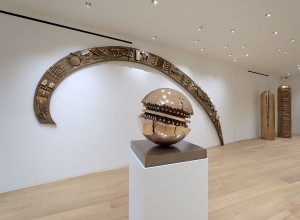 Key to them are the sculptor’s fascination with symbols and signs and the “language” he creates with them. Paul Klee and Lucio Fontana have been influences but what comes across strongly in this exhibition is a natural ability to renew himself in his interpretation of the latter’s Spatialism.