What a decade it was! Opening with the Festival of Britain in 1951 which played an important role in the fashioning of a new Britain which was recovering and rebuilding itself after the Second World War. The exhibition views the decade through the eyes of a fictional young couple who were setting out in life together and aptly starts with the Festival of Britain itself and goes on to look at various aspects of daily life. 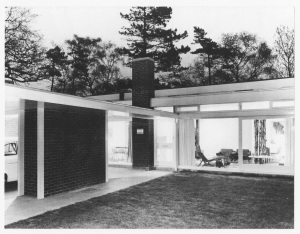 Focusing on housing it considers both exterior and interior design. Famous design names such as Lucienne Day, Robert Welch and Terence Conran, as well as Sanderson, Ercol and Whiteleaf whose distinctive designs were finding customers at home and overseas are included. Home technology grew too with labour-saving electrical devices for the kitchen such as washing machines and food mixers.  By 1954 Rationing had ended and by relaxing Hire Purchase controls consumers were able to buy such “luxuries” as a television and indeed by 1956 over half the TV sets were being bought on HP. The British Film Industry flourished with home-grown stars such as Diana Dors and Dirk Bogarde and with films like Bridge on the River Kwai and The Dam Busters attracting audiences both at home and abroad. The decade saw the final flourish of Britain as a place to spend a holiday although this declined in the 1960s as package holidays really took off.

The late 50s were a time of economic prosperity and 1959 was both its apogee and also the herald of the 60s.  It is an era best summed up the words of Prime Minister Harold Macmillan who said “Go around the country, go to the industrial towns, go to the farms and you will see a state of prosperity such as we have never had in my lifetime …most of our people have never had it so good.”

This exhibition, set against colours of the period, will be both nostalgic to those who lived through it while also being informative and intriguing to newer generations and it is one that I heartily recommend.  It depicts a very different, dare I say, friendlier world and one where the new designs of that time still have appeal to a modern day audience.