I am grateful to John Kirkwood for visiting and writing about this exhibition:

Emma Brownlow, The Foundling Restored to its Mother, 1858
©Coram in the care of The Foundling Museum,
featuring illustration of Hetty Feather © Nick Sharratt

Fans of  Jacqueline Wilson’s character Hetty Feather will love this exhibition featuring as it does many costumes and artefacts from the  television series  based on the popular and successful books displayed in the Foundling Museum  the actual location of  the stories where you can experience a little of what  Hetty’s  life would have been like. 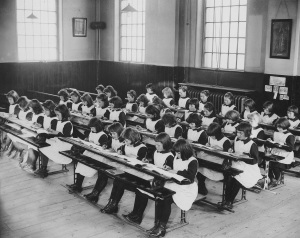 Girls in the London Foundling Hospital schoolroom, early 20th
century,
courtesy Coram in the care of The Foundling Museum

We should consider ourselves fortunate that the artist Mark Neville often focuses on social issues in his projects and this exhibition, appropriately held at The Foundling Museum, is an important one. 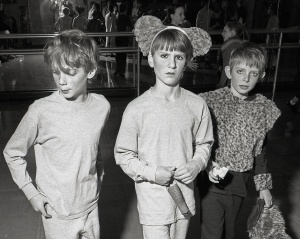 Child’s Play combines Mark Neville’s photographs with a book and on March 20th a symposium looking at play in our cities today.

The photographs look at children at play in this country from Port Glasgow to London, Pittsburgh, Canada, the Ukraine, Afghanistan and Kenya. While the images capture children in the act of playing whatever the circumstances of where they live they serve as reminder and inspiration for all of us to get involved to make sure that children’s universal right to play as recognised by the UN is not allowed to vanish and be ignored. They are our future and we owe it to them. 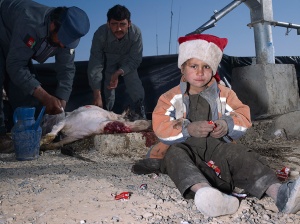 FOUND: An exhibition curated by Cornelia Parker, The Foundling Museum, 40 Brunswick Square, London WC1, until 4th September 2016
“In order for something to be found, it has to at some point in its history to have been lost”

This is a hugely engaging exhibition which has been curated by Foundling Fellow Cornelia Parker RA. The idea for it comes from the Museum’s 18th century tokens, a variety of small objects left by mothers as a means of identifying their offspring should they ever be in a position to return to the Foundling Hospital to claim their child.

Cornelia and more than sixty invited artists have explored the theme of “found” either through new works or found objects which are displayed alongside the Museum’s historic collections. The involvement of artists recalls the support of William Hogarth and the composer Handel in the Foundling Hospital’s early days. 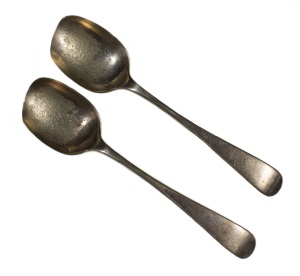 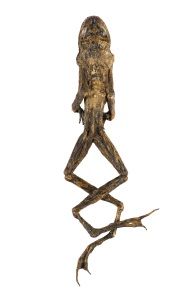 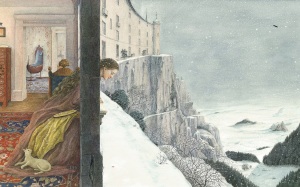 This is an exploration of characters from literature who were either found, orphaned, adopted or fostered and how they were artistically portrayed by illustrators and artists such as Thomas Rowlandson, George Cruikshank, Arthur Rackham, David Hockney and Quentin Blake.

Henry Fielding’s 1749 novel The History of Tom Jones, A Foundling has been selected to be the subject of new illustrations by three contemporary artists – Chris Haughton, Pablo Bronstein and Posy Simmonds. 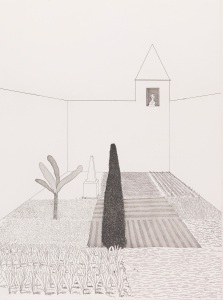 David Hockney,
Rapunzel Growing in the Garden from Illustrations for Six Fairy Tales from the Brothers Grimm, 1969
© David Hockney

The show is eloquently summed up by its curator Stephanie Chapman: “Illustrators over the past 250 years have been inspired by a rich variety of characters in fiction and folklore who have experienced an alternative childhood. A good illustrator enhances our understanding and enjoyment of the story, and the selected works in this exhibition show how talented artists across the centuries have brought to life the childhood experiences – as well as their later repercussions – of some of our best-loved fictional characters.”

Stref, from JM Barries Peter Pan The Graphic Novel, 2015,
published by BC Books

A drawing of Alice from Lewis Carroll’s manuscript of Alice’s Adventures Under Ground, written between 1862-64
(c) The British Library Board

The enduring appeal to successive generations of Lewis Carroll’s tale with its illustrations by John Tenniel is without doubt.  This show looks at how it has been an inspiration to many others over the last one hundred and fifty years whether they be artists, illustrators, musicians, designers or filmmakers.

An illustration of the Cheshire Cat by Helen Oxenbury from Lewis Carroll’s Alice’s Adventures in Wonderland
(c) 1999 Helen Oxenbury, reproduced by permission of Walker Books Ltd

As the show’s curator Helen Melody says: “Ever since its conception, the story of Alice has been analysed, appropriated, reimagined and re-illustrated, and yet despite undergoing so much change it remains remarkably true to Carroll’s original story.  This exhibition, which is part of national and international celebrations of the 150th anniversary of the publication of Alice, highlights the enduring place of this iconic text in British culture and we hope that visitors to Alice in Wonderland will find new enjoyment and inspiration from the collections on show.” 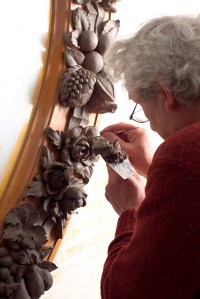 The Court Room’s plasterwork was created in the 1740s so imagine how exciting it is to see that this sculptural form is still practised today by Geoffrey Preston and his team. He and the team are also responsible for restoring some of the 18th century stucco ceilings at Uppark and elsewhere. These and other projects are shown through photographs and mouldings reflecting both traditional stucco and modern methods. It is worth remembering as you enjoy this engaging exhibition that stucco is modelled by hand without any use of moulding or casting so each piece is unique!

Geoffrey Preston working on a clay model based on a Tintoretto painting of Bacchus,
Venus & Ariadne, 2013
© nickcarterphotography.com