TUGHILL HOUSE – A Private Collection from the Cotswolds

When I viewed this sale my first thought was: 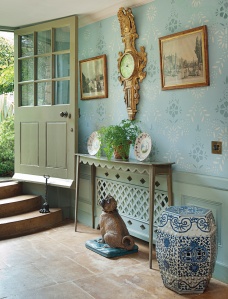 Wow!  Wouldn’t I love to furnish my home like this?

The genius behind all this was Stanley Falconer, who was a director of Sibyl Colefax & John Fowler, the legendary London interior decorating company.  He bought the house in 1975 and over the years adapted the interiors, including the addition of a study in 1990, to suit his family’s lifestyle. The gardens were also a striking mix of Italianate terraces, parterres inspired by 16th and 17th century designs and a beech walk. 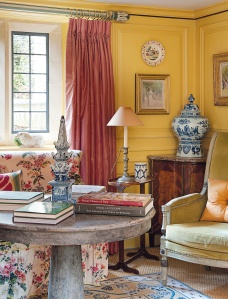 As the lots in the sale show it is a heady, but refined mixture of French and English taste.  At Colefax & Fowler, Falconer worked on many projects, including Daylesford and Sudeley Castle as well as the State Rooms at Liverpool Town Hall.  The way he furnished his own home is a perfect reflection of the sense of style for which Colefax & Fowler are renowned, and to which he was a very active contributor.

A Small Selection of Lots: 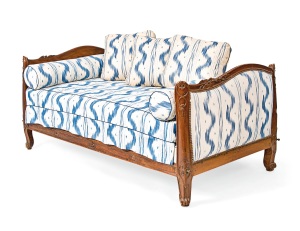 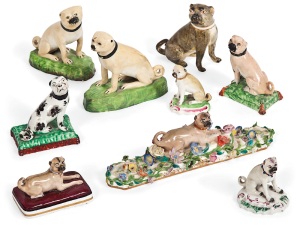 Lot 54
NINE PORCELAIN AND POTTERY MODELS OF PUG DOGS
CIRCA 1755-1890, INCLUDING MILTON AND DERBY, IMPRESSED AND PAINTED MARKS
Comprising: a Derby example seated on a green and puce-edged base, a smaller example similar, an English porcelain example on a flower-encrusted long base, another recumbent on a purple cushion, a continental porcelain example, two honey-coloured examples on green mound bases and two pearlware examples seated on tasselled cushions
The pug on flower-encrusted base 9 in. (23 cm.) long overall (9)
Estimate: £2,000 – 3,000 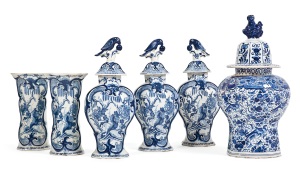 LOT 24
A DUTCH DELFT GARNITURE OF BLUE AND WHITE VASES AND A VASE AND A COVER
LATE 18TH CENTURY
The garniture painted with reserves of a Chinese garden, with parrot finials, the single vase painted all over with flowers and birds
The single vase 18 in. (45.7 cm.) high (6)
Estimate:£1,500 – 2,500

All images courtesy of Christie’s.