It is surprising that the artistic output of Alan Sorrell (1904 – 1974) has not been celebrated before this exhibition in which many of the works on show come from the collection held by Sorrell’s son.

The exhibition traces his artistic career, including his two-year scholarship at the British School in Rome (1928-1930).  He was a member of the Neo-Romantic school between the wars and went on to create scenes of RAF life while serving during the Second World War. Also on view are three panels from his mural Working Boats from Around the British Coast which was commissioned for the Festival of Britain in 1951.  It decorated the Nelson Bar of the HMS Campania, an aircraft carrier used as an exhibition space during the Festival.

A great lover of archaeology, particularly Roman Britain, he is well-known for his reconstructions of historical monuments and sites and tableaux of ancient life and examples on view will bring back memories to those of us who remember seeing them at Ministry of Works run ancient monuments.  Jerzy Kierkuc-Bielinski, Curator of Sir John Soane’s Museum, says: “Sorrell did so much through his work to bring life to the lost archaeological sites of Roman and Norman Britain. I hope that this exhibition will bring to life the important legacy of Sorrell’s work”. 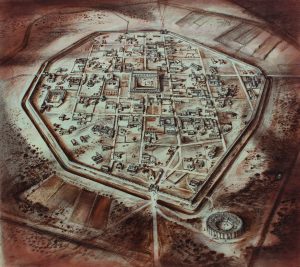 One comment on “Alan Sorrell: A Life Reconstructed, until 25th January”