Fluxland – a new immersive artwork to travel along the River Thames in London, until 30th September 2016

French artist Cyril de Commarque is the creator of this new interactive art work that is undertaking a series of journeys up and down the Thames until the end of the month. The twenty-five metre long former freight boat has a mirrored polyhedron-shaped upper structure which represents the Ancient Greek belief that this shape was a source for artistic and philosophical inspiration. While the mirrors will reflect the buildings they pass, on board visitors will be able to hear the artist’s specially sourced soundtrack.  The Fluxus Movement of the 1960s which aimed to reduce the boundaries between art and life was the artist’s inspiration for this intriguing exercise. 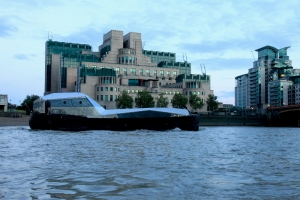 This event is part of Totally Thames that runs until 30th September 2016. www.totallythames.org/