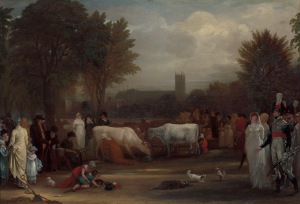 I have had the great delight of writing about the fabulous London home of the Spencer family with its remarkable early neo-classical interiors by James ‘Athenian’ Stuart over many years now.

It is hard to believe that it is now twenty-five years since the house was re-opened to the public following the restoration of the fine interiors carried out for RIT Capital Partners PLC, under Lord Rothschild’s chairmanship. The house’s collection is managed by the Rothschild Foundation.

Among the paintings on display in the house are a group of paintings by the American-born artist Benjamin West from the Royal Collection. In the Dining Room are the Death of Wolfe (1771), The Death of Chevalier Bayard (1772) and The Death of Epaminondas (1773) which were commissioned by George III, while upstairs in Lady Spencer’s Room visitors will discover The Family of the King of Armenia before Cyrus (1773) and The Wife of Arminius brought captive to Germanicus (1773).

The Dining Room, Spencer House
Courtesy of The Rothschild Foundation

These have been joined by a special loan (to mark the 25th anniversary) from the Yale Center for British Art of West’s Milkmaids in St. James’s Park, Westminster Abbey Beyond (ca. 1801, oil on panel, Paul Mellon Fund). And a very interesting loan it is for this is an unusual subject in West’s oeuvre with its combination of pastoral and urban life.  It depicts the eastern end of nearby St James’s Park where milkmaids had kept cows from the late 17th century onwards and by the time of the painting it had become somewhat fashionable to visit that part of the park to imbibe either milk or a mixture of milk and wine known as syllabub (one of my favourite deserts). Appropriately enough the painting hangs in the Dining Room.