The Berlin-born Dr Peter D. Sommer (1940-2013) was a successful financier and a lover of French and German Fine and Decorative Arts, particularly from the 18th century. However as the catalogue reveals he did not limit his collecting to those areas only as there is good English furniture, silver, jewellery, Impressionist pictures and some rather fine Hermès luggage too.

Interior view showing a magnificent Louis XV regulateur, circa 1745, formerly in the collection of the Viennese Rothschilds (estimate: £200,000-300,000, illustrated left) and one of a set of six grand Viennese giltwood armchairs with seats and backs of Beauvais tapestry depicting La Fontaine’s Fables (offered over three lots each with estimates of £100,000-150,000)
CHRISTIE’S IMAGES LTD. 2014

Frederick the Great’s patronage of the arts has been a great influence in Dr Sommer’s collecting, especially in pictures which feature many ‘fêtes galantes’ and mythological subjects. As well as an interesting group of four tables en chiffonnière by Bernard II van Risen Burgh – known as ‘BVRB’ – the master ébéniste of the French mid-18th century there are a pair of German chairs similar to those ordered by Frederick for his various palaces.  It is a remarkable ensemble and achievement. 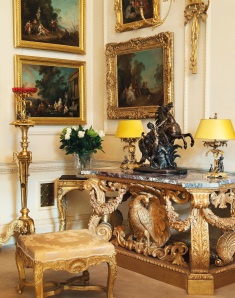 Interior View showing one of a pair of English Giltwood Side Tables
CHRISTIE’S IMAGES LTD. 2014