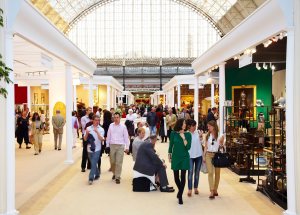 It somewhat takes me aback to realise that this is actually the forty-second Fair and as always it offers a very wide-ranging mixture of old and modern art, furniture, antiques and collectibles. There is almost certainly something for everyone.

One feature of this year’s fair is the exhibition Archibald Knox: Beauty and Modernity – a Designer Ahead of His Time which marks the 150th anniversary of his birth. This will bring together fine examples of his work, including exceptional and rare pieces of Liberty & Co. Cymric silver, a large collection of Knox’s Liberty Tudric clocks and jewellery, some of which are being shown in public for the first time. 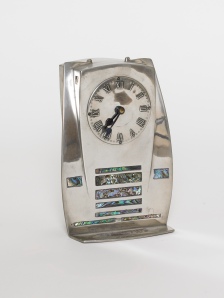 They certainly prove his important role in the Arts & Crafts movement and British Art Nouveau. His celebrated partnership with Liberty & Co achieved the shop’s avant-garde reputation, although Knox himself was unrecognised in his own lifetime. His work is of course now eagerly sought across the world. The V&A’s Eric Turner says: “It is very appropriate that the Archibald Knox Society wishes to acknowledge the 150th anniversary of Knox’s birth this year. Knox was an enormously accomplished designer, not only in silver and pewter for the Liberty Cymric and Tudric ranges but also as a designer of carpets, other  textiles and jewellery. A shy and retiring man, his reputation was not properly acknowledged in his lifetime because of Liberty’s policy of anonymity for their designers. It was only in the latter part of the 20th century that his talents came to be fully appreciated. The Society serves to bring recognition of these to an ever-widening audience.” 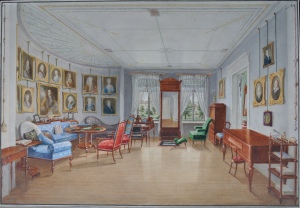 Among the many special events taking place during the Fair is one that will have resonance and interest to those interested in London’s Mayfair as a leading art market centre which it has been for the last ninety years. Entitled London’s gallery heartland under threat – is Mayfair losing its soul? it will be chaired by Ivan Macquisten, Editor of the Antiques Trade Gazette and will be a Q&A session with Robert Davis, Deputy Leader of Westminster Council, on the subject of the crisis faced by galleries on Cork Street and in the surrounding Mayfair area in light of soaring rents and recent property developments. One thing that will receive attention is Westminster Council’s strategy of developing Special Policy Areas (SPAs) in recognition of the unique character of places such as Mayfair, where art galleries and auction houses cluster to create a local “brand” and arguably make a vital contribution to the regional culture and economy. However, it should be remembered that while the SPAs are part of the council’s core strategy they have no legal standing under planning law. It promises to be an emotive session but one that needs airing as the loss of this gallery heartland will be an almost irreversible blow to Westminster and London’s international standing.